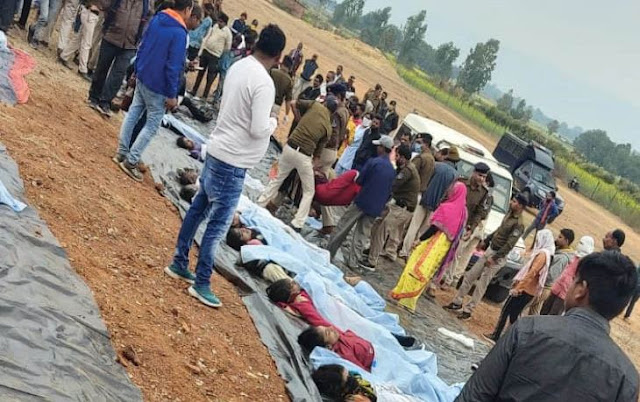 India News - Major incident occurred in Sidhi district of Madhya Pradesh at 7:30 am on Tuesday. The bus going to Satna along with 62 people, including the driver, fell into the 22-feet deep Bansagar canal. The bodies of 51 people have been found so far. 7 people survived, while 4 people are still missing.

The death of 16 passengers is 25 years or less. Doctors fell short at Rampur Naikin for postmortem of 51 dead bodies. Doctors were called from all over the district, and postmortem of all the bodies was done.

Some bodies are believed to have been washed away. Seven women were rescued by a woman, a girl and her brother before the rescue team arrived. The driver of the bus swam out and was later taken into custody.

The bus was over capacity, many were going to take exams

According to information received by World News superfast, the accident took place in Sarda village near Rampur Naikin. This place is 80 kilometers from Sidhi and about 100 kilometers from Satna. The bus left from Sidhi at 6 am. It could seat 32 people, but the driver filled more than 60 people. Most of them were residents of Sidhi and Singrauli districts.

The 12 boys and girls boarded the bus along with their mother or father to take Satna and NTPC to railway, NTPC and nursing exams.

The water flow in the 22 feet deep canal was fast, passengers did not get a chance to escape

In the canal where the accident occurred, water is released from the Bansagar reservoir. There was more water flow at the time of the accident. Because of this, the passengers did not get a chance to escape. It is believed that the passengers may have drifted far away from the spot due to the strong currents. When the rescue team reached the spot, the bus was completely submerged in a 22-foot deep canal.

After stopping the flow of water from the dam 40 km away, it was diverted to Sihawal Canal, then the water in Bansagar Canal decreased. The divers then descended into the canal and the Rescue Operation of the State Disaster Response Force (SDRF) began. About four hours after the accident, the bus was ejected with the help of a crane at 11:45 am.

On Tuesday, under the Pradhan Mantri Awas Yojana, there was a program to house 1.10 lakh people of Madhya Pradesh. Home Minister Amit Shah was to be involved in this through video conferencing. Chief Minister Shivraj Singh Chauhan announced that the program will no longer be possible due to the accident.

President Ramnath Kovind, Prime Minister Narendra Modi and Chief Minister Shivraj Singh Chauhan expressed grief over the accident. Madhya Pradesh government has announced a compensation of Rs 5-5 lakh for the families of those who died in the accident. Out of this, 10-10 thousand rupees will be given immediately. At the same time, Modi has announced 2 lakh rupees from the Prime Minister's Relief Fund for the family and 50 thousand for the seriously injured.

Expectations of future of 16 families gone

Of the bodies recovered from the Bansagar canal, 45 have been identified. Most of them are youngsters, who were going to Rewa and Satna to take Railways and B.Sc Nursing exams. Of the 51 bodies identified, 16 passengers were aged between 20 and 25 years. A two-year-old child also died in the accident.